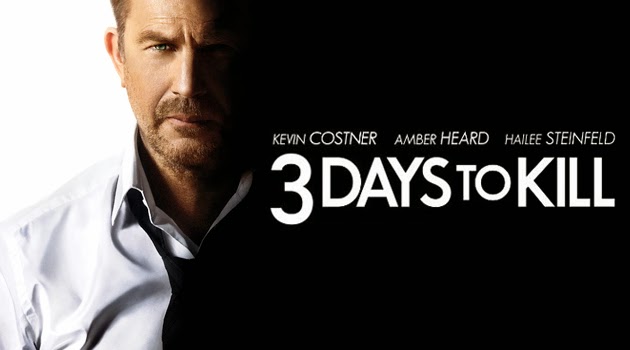 Todays Film Friday is 3 Days to Kill. I went and saw this last week in theaters…lets get started…..

Who’s in it?
Kevin Costner, Hailee Steinfeld and Amber Heard.

Whats it about?
A CIA agent finds out he has 3 months to live, so he quits his job and moves to France to spend his last few months with his wife and daughter. suddenly Amber Heard shows up and tells him that if he gets her The Wolf (a bad guy), she has some sort of treatment that will give him more time. So he agrees all the while trying to juggle his ten daughter who is angry at him for not being around when she was growing up.

What did you like about it?
I liked being able to see a little bit of Paris, as well as Kevin Costner.

What did you not like about it?
I didn’t like Amber Heard I feel like her acting is so forced, she was trying to play the sexy assassin that Angelina Jolie would have been able to do in her  sleep, but Amber just made it seem so forced and almost like she was demanding that he think she was a sexy assassin ha ha ha.
I also think the story line could have been a bit tighter, there were some parts that I thought seriously no one would react that way, so a different actress and a little better writing a it could have been AMAZING.

Would you recommend it?
I would, but REDBOX it. I feel almost robbed spending $30 to get in to the movie and then another $40 at concession, but on the plus side I did see a preview for another movie with Kevin Costner and Jennifer Garner that looks really good, its called Draft Day.