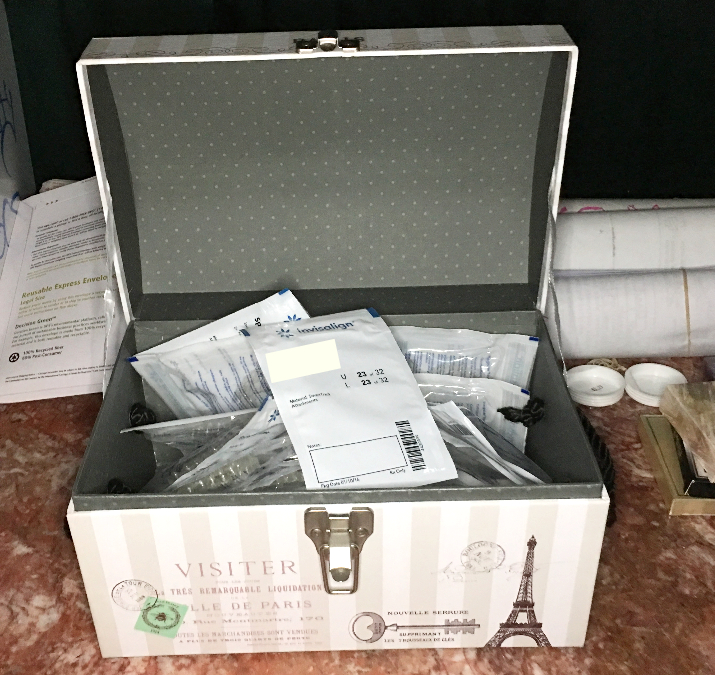 Today marks 1 year to the day that I have had my Invisalign, and I thought I would celebrate by doing an update for you guys. I did do an Invisalign First Impression video and blog post that had some tips and tricks, to help any newbies out there, I will place the video below so you can watch that if you like.

I want to start off by saying I am honestly so grateful I was able to do a full Invisalign treatment, it was expensive, but I whole heartedly feel it was worth the money, and the time put into it.

Having said that there are a few things that I didn’t know going in and thought I would share here.

Having said that you do end up learning to speak a bit clearer and the lisp typically shows up when you place new trays in, which is about every 2-3 weeks. Also the lisp is not as noticeable to everyone else as it is to you, so don’t let that stand in your way.

2. You see your Orthodontist A LOT, so pick someone you like.

I would say I see my Orthodontist every 10-12 weeks, and he is so nice, and he himself has gone through the full Invisalign course, so he knows what I’m going through and is always ready for any questions I have.

3. They will place clips/hooks on your teeth.

That sounds so scary and ugly but it really isn’t, they are simply tooth colored bumps made from a glue/gel, and thats how your Invisalign will push or pull your teeth in the direction they need to go. Once your done with your Invisalign course they simply pop them off, there is no pain involved with the clips.

4. Sometimes you have stubborn teeth.

In December 2016 I had a problem with a really tight tray, typically I would leave it in for 3 weeks rather than 2 but 4 weeks had passed and it was still tight. My Orthodontist gave me this thing called Chewies Aligner Tray Seaters, they are essentially little rubber dental hoses that you chew on to push your trays down over the teeth, and that in turn forces the teeth to move. There is some pressure/pain associated with this, but it’s not enough to cause you to cry it simply feels like an achy tooth. I am now using the rubber hose every night while watching tv as it makes your teeth sit into the trays better, which means faster results. Having said that I do no want to do a revision course because I tried to speed it up, so I still wear them for 2 weeks.

You are supposed to wear your trays 22 hours a day, which I honestly try to do. On the days that I achieve this goal I do notice that my jaws feel tired, it’s that feeling you get when you’ve been talking too much, or chewing the same piece of gum for too long. When this happens I pop the trays out for about 10 minutes and the pressure goes away.

The trays are made from plastic and sometimes they can have a sharp edge or a tiny fragment that needs to come off, using a cheap emory board file it down until it can be placed in your mouth without causing any pain.

7. Get your teeth filed.

The first time I went into my Orthodontist appointment to get my tray fitting, (which is where they take the molds of your mouth), the first thing they did was file the tops of my teeth, so they were smooth and not worn/jagged. They did this because thats how your teeth should look, and they wanted the trays to fit really snuggly. My Orthodontist had said not every dentist will do this, and most people have to request it, but it shouldn’t result in an additional charge, so make sure you ask them to do this before your molds are done.

I think that is everything I can think of right now. If you have any specific questions leave them in the comments and I will make a point to return to this post to answer questions. Also here is today’s Invisalign Update Video.