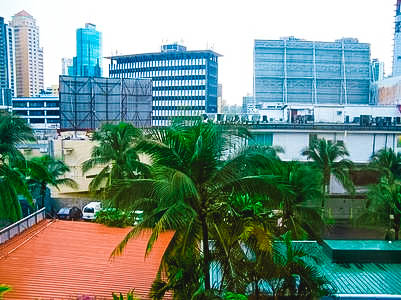 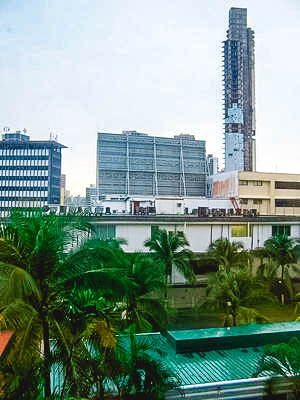 One August day, Don and I had just left the movies and decided to go to Walmart, when Don asked “do you want to go to Panama tomorrow?” I was shocked, we had been talking about going for a few months but to take a trip out of the country with no notice, that was a bit too much for this list loving, super organized girl.

I went home a booked our trip for two days later, I needed to make sure I had enough time to pack anything and everything I would need, as well as get a spray tan, cause I was looking quite pale lol.

When I booked our hotel I opted for the financial district as everyone online had said that was the place to stay. Because we were going in the middle of Summer and with only two days notice we didn’t end up with much a view from our room, but I was still so excited to be there, as this was my first trip out of the country.

We spent the first two days wondering around Panama City, and found the cutest hole in the wall restaurant that served the most amazing seafood soup and garlic bread, all for $3 a person! Nothing however could have prepared me for the traffic in this city. I like to consider myself and extremely confident driver, but I was so glad we opted NOT to rent a car, as the drivers seemed to be making up their own rules on the road, and everyone and I mean everyone was honking for what seemed to be no other reason than everyone else was doing it. 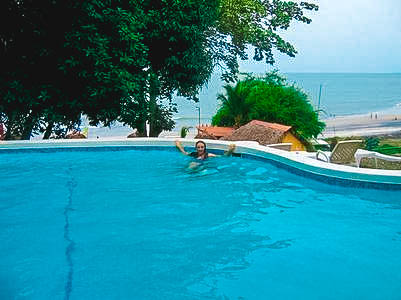 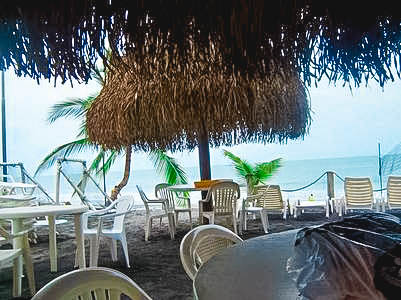 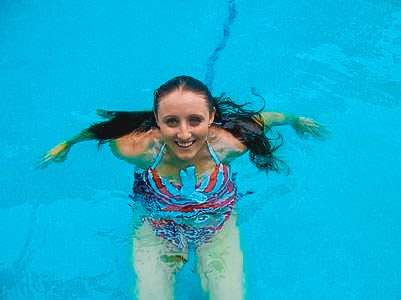 The hotel we were staying at had a sister hotel in a town called Coronado about an hours drive up the coast, I was really excited to go as there were no real beaches near by.

This little town of Coronado stole my heart. People were driving around in golf carts, kids were playing in the street, everyone was so friendly, and it had a pool on the beach, it doesn’t get better than that. It was however so hot and humid, a humidity I have never felt living in Hawaii, Alabama or Louisiana, it was so humid you almost felt like you couldn’t breathe so the pool was a godsend. 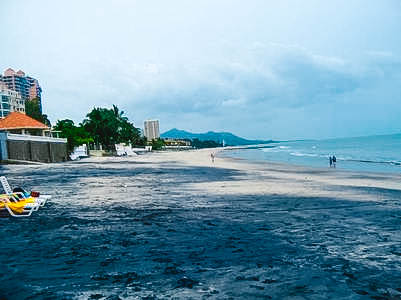 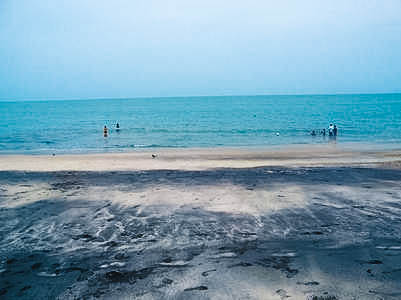 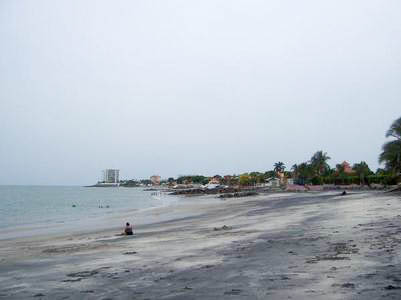 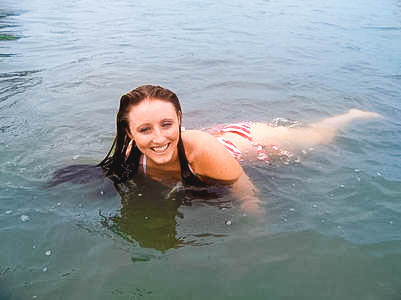 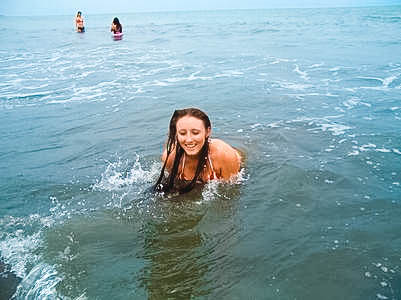 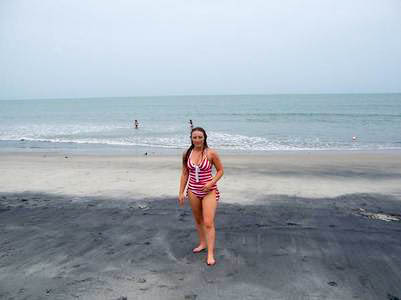 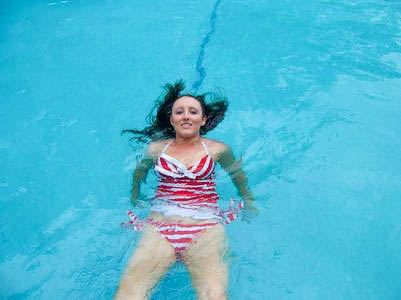 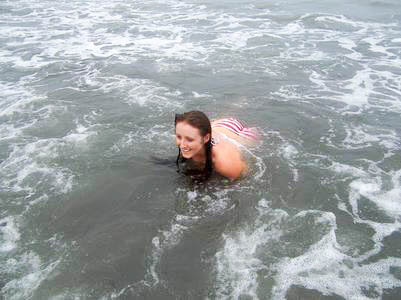 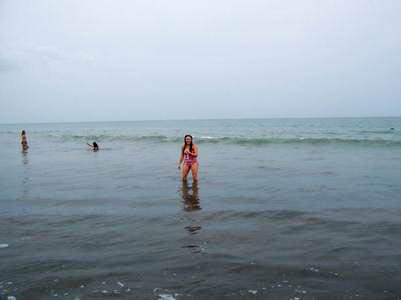 The beaches have a lot of ore in the sand which gives them the black/grey look, but the water was cool, and shallow, so I didn’t have to worry about riptides, which is a problem in the area.

Whilst there the locals told us about the place called Bocas Del Toro, and that was supposedly the it place to go. We would have to book a flight as it was an island on the atlantic side of the country, but we decided to live it up whilst we were there. 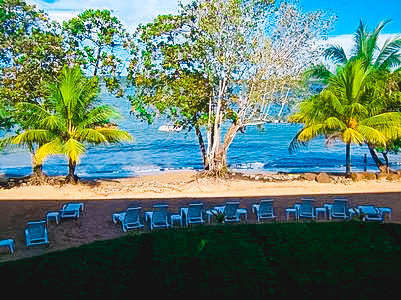 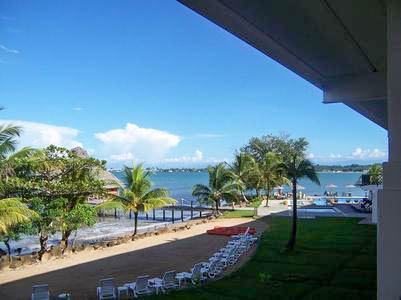 We flew into Bocas Del Toro the next afternoon, it was beautiful, they had white sandy beaches, an amazing wooden dock stretching out to all the gorgeous boats in the harbor, and everyone there was so nice.

It is worth mentioning that up until this point I had been so careful as to what I ate and drank as we Americans tend to have weak stomaches, I walked to the dock restaurant and did the unthinkable, and I cannot even tell you what I was thinking, I ordered a Long Island Iced Tea, and a Chicken Salad. It’s like an unwritten rule that if your worried about getting sick on vacation, you don’t eat the salad, and I just tossed that right out the window. Within about 8-12 hours I was so incredibly ill, I curled up in a ball on the bathroom floor and stayed there until our flight. I kept telling myself If I could just make it back to the main hotel, I could see a doctor and everything would be fine.

We asked for a late checkout, which they refused to give us as they wanted to clean the room, we then tried to get an earlier flight, which we couldn’t and so I curled up onto my suitcase in the airport bathroom for three hours waiting for our flight. When we finally landed (it was only a 45 minute flight) back in Panama City I honestly thought I was dying, I was so weak and dehydrated Don had to carry me to the Taxi, and from there to the hotel, and I then spent the last 3 days of our trip on the floor of the bathroom. We tried to get a doctor, but because I couldn’t actually go anywhere, and the hotel didn’t have one they contracted with, I called my mom instead.

At $3 a minute she explained to Don everything I would need and we were luckily in a country where you can just ask the Pharmacist and they give it to you, no prescription needed.

After I got back home I did see a doctor, where I was placed on antibiotics, as well as given an IV for fluids.

While you may be thinking this is a horror story and I probably never wanted to go back, you would be wrong. While it was a terrible end to our otherwise amazing vacation, I did want to go back, and we did go back to Coronado. Which I will share with you all next Tuesday!

Until then  I would love to know where you have traveled to, anywhere outside your home country?

Did you encounter a bit of a horror story yourself?